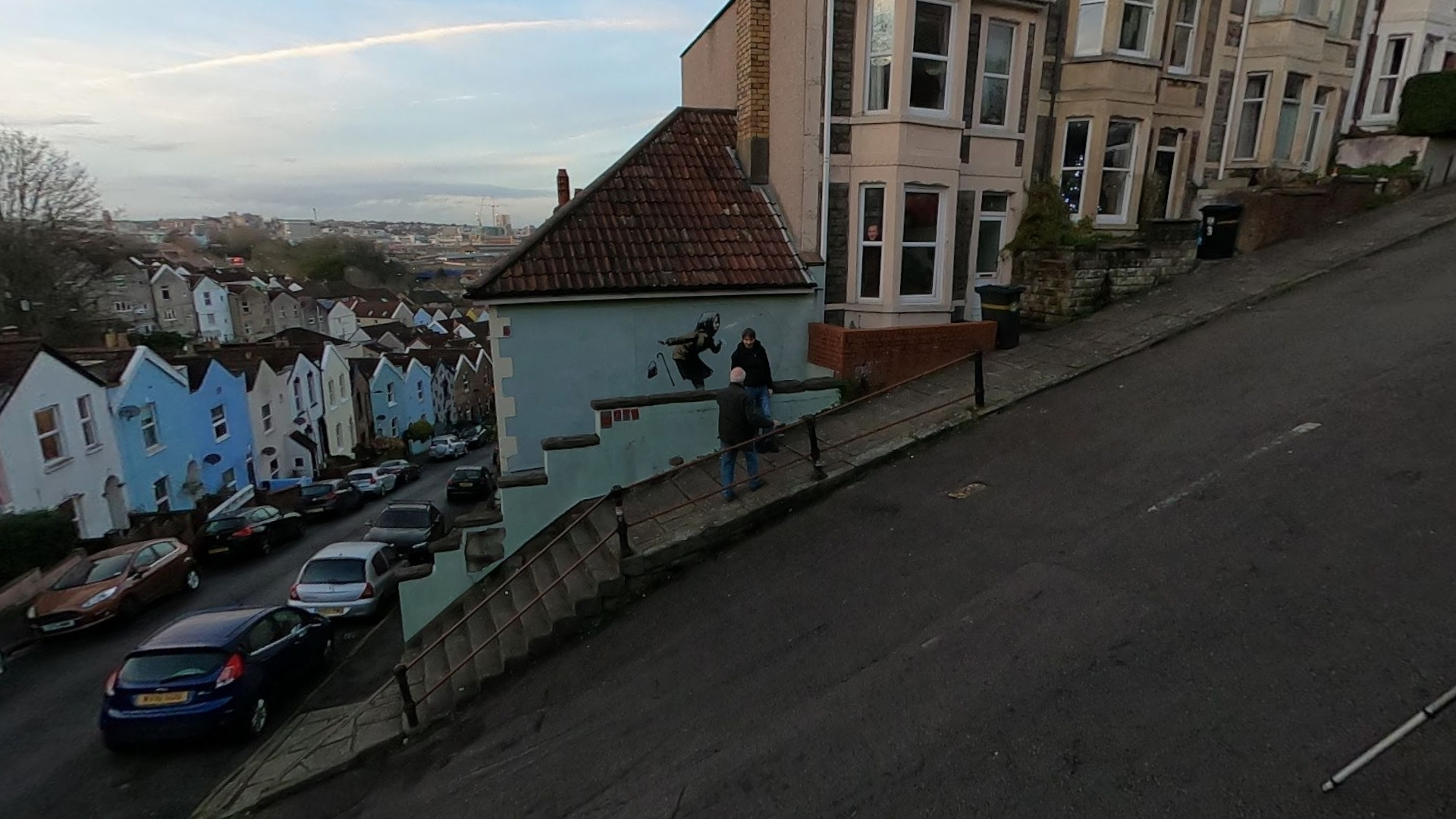 On Location With Banksy in VR

I recently went on a Banksy Tour in AltspaceVR, and it was weirdly exciting, because it’s still kind of amazing to be in two places at once – standing alone in my living room and also standing together with thirty other people as avatars on a transparent platform above a street in Bristol, England, looking at and talking about the work of street artist Banksy.

It was also weird because our environment was composed of a mashup of 360º images captured by Google Street View drivers who accidently included Banksy’s art, superimposed with closeup images of his work.

It was also exciting because the host, Tom Nickels, rather than lecturing, casually invited us all to look at the Banksy graffiti for a moment, and then to say something about what it brought up for us. This really reminded me of the way Visual Thinking Strategies and Artful Thinking Routines work, both of which are used in museum education programs and schools as ways of strengthening critical thinking skills by looking at art.

This really reminded me of the way Visual Thinking Strategies and Artful Thinking Routines work.

Here I was, gathered with a group of grownups who could be anywhere in the world at that moment, about whom I knew nothing except all of us were interested in Banksy or street art and were familiar with Altspace VR. What was really fun was seeing how comfortable it felt to be looking at and describing what I saw and using it as evidence to explain what I thought was going on, and then listening to many other people who looked at the same things I did and saw so many other things in them.

Banksy’s works are site specific....Our host Tom Nickels used GoogleStreet View as a time machine in VR to show us that all important context.

Banksy’s works are site specific, deriving their power and meaning from the place where he put them. The only way to fully understand their significance is to see them in their original context. Since the four murals we looked at don’t exist in real life anymore – they were either painted over or removed by the buildings’ owners - our host Tom Nickels used GoogleStreet View in VR to take us back in time to show us that all important context.

The hour flew pleasantly by, despite the fact that my Quest headset felt like it weighed a ton on my head. I can’t wait for the form factor to become both light and affordable. Right now you can have one thing or the other – affordability, sort of (the Quest2 just went up in price from $399 to$499), or lightness – HTC Vive Flow, for the same price, weighs only 189 grams, but needs to be connected to an Android phone or other battery source.

The experience strengthened my belief in the benefits for museums of setting up similar art tours on various VR platforms and inviting people from both VR and IRL communities to join them for this kind of free-flowing, energizing and welcoming experience.

All photos taken by Michael Owen in a Quest 2 headset, in Altspace VR.