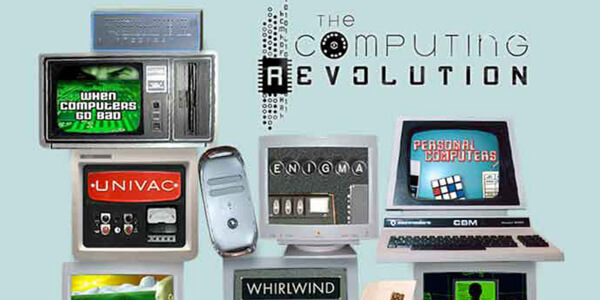 To shrink an entire museum into one exhibition

When the Museum of Science took over Boston’s Computer Museum, their challenge was to shrink an entire museum into one exhibition. We created seven computer stations and a companion web site that highlight key moments, concepts and breakthroughs from the history of computing, and provide a high level of interactivity.

Working with materials and direction from the Museum, we visualized the history of The Computing Revolution by creating unique user interfaces for each of the seven kiosks: Enigma, Whirlwind, UNIVAC, Personal Computers, When Computers Go Bad, Hacking, and 21st Century.

To give visitors some experience with a well known antecedent of modern computers, we recreated a working World War II Enigma Machine where they can try their hands at creating and decoding messages, and under- stand the tremendous achievement of breaking the German code.

We developed a video capture tool for two of the stations; visitors can tell their own horror stories at When Computers Go Bad, and they can predict the future of computing at the 21st Century station.

It was essential for Museum staff to be able to review and edit these visitor videos, so we developed an admin tool that allows Museum staff to review the recorded videos and then update the selection to be featured on the kiosks, from their own desktops. We also created four short, 3D-animated films detailing the inner workings of computers, teaching visitors about Binary Counting, Vacuum Tubes, Magnetic Core Memory and Integrated Circuit Chips.