Finding an intimate space for contemplation 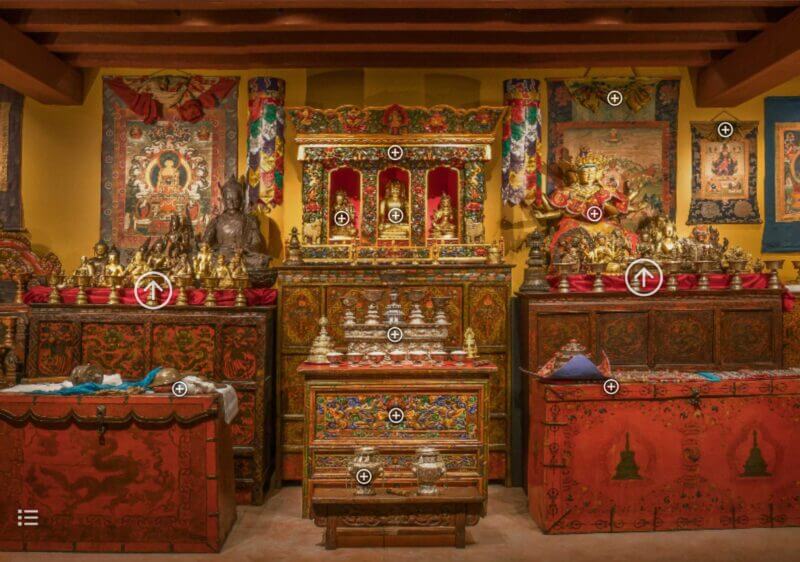 To create a chapel-like experience and display art and ritual objects as they would be in a private household shrine.

I love to stop in and sit by the Shrine Room, even if it’s just for 15 minutes."

More like a chapel than a gallery, the Shrine Room displays art and ritual objects as they would be in a private household shrine, a space used for offerings, devotional prayer, rituals, and contemplation. Elena Pakhoutova, Curator of Himalayan Art, periodically replaces a number of objects so that the room can represent different Tibetan Buddhist traditions.

There is a touch screen interactive outside the Shrine Room where visitors can call up images of more than 100 objects, to see details and different views, and learn about how they are used.

MediaCombo’s brief was to update the interactive and the companion website to introduce the new items, and refresh the user interface. However, the original software used to build the panoramic experience could not be updated. Rather than redesign the entire experience from scratch, we sought to find a middle path.

We were able to make three major improvements, while keeping as much as we could of the original digital framework.  First, we created new 180º panoramic photos to bring the darkened space and the objects in it into sharper focus than previously. Second, we re-programmed the touch screen nearby to be more responsive to visitors, significantly improving load time for images and text. Third we updated the navigation and graphics to make visitors’ options clearer.

Since it first opened, the Tibetan Buddhist Shrine Room has been one of the most popular installations at The Rubin Museum. The backend modifications we made ensure that both digital versions provide a much better user experience.

Onsite visitors now have a much easier time using the touch screen to study the thangkas, sculptures, ritual items, and musical instruments that adorn the Shrine Room.

On the website, the rich colors of the architecture and objects are more visible, making the room more inviting. People are able to zoom in closer to each wall and corner for a better appreciation of this unique environment and click on individual object hotspots.

The Shrine Room sets the stage for quiet contemplation of the rest of the Museum.